What is Ayllu Solar?

Ayllu Solar is an initiative of SERC Chile (Solar Energy Research Center) that aims to create human capital to boost the sustainable development of urban and rural communities in the Arica and Parinacota region, through the use of solar energy in order to contribute, from science, to improve the quality of life of its inhabitants.

What is our goal?

Collaborate with the Arica and Parinacota Region so that urban and rural communities achieve sustainable development through the use of solar energy.

Objectives of the initiative:

What does Ayllu mean?

Ayllu means community in Aymara and Quechua languages. The name of the project, then, is because it is based on the concept of co-construction with the communities of Arica and Parinacota . Communities will have a key role in all phases of implementation during the five-year duration of the project. 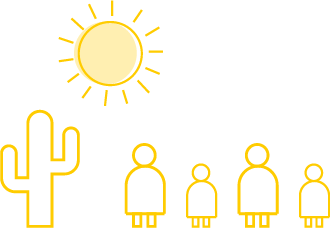 Why this region and not another?

Given its high levels of irradiation and its exceptional clarity, the Atacama Desert has great potential for the production of electricity, heat and light based on solar energy. It is also an exceptional area for the study, development and testing of new solar technologies. These characteristics are the main reasons why SERC Chile decided to implement this project, called Ayllu Solar, in the Arica and Parinacota region.

The BHP Foundation is an important partner in this initiative, as it shares SERC Chile's vision that solar energy is fundamental for the sustainable development of the Arica and Parinacota Region. Your financial contribution will enable you to specify key aspects of this initiative.

Phases of the project 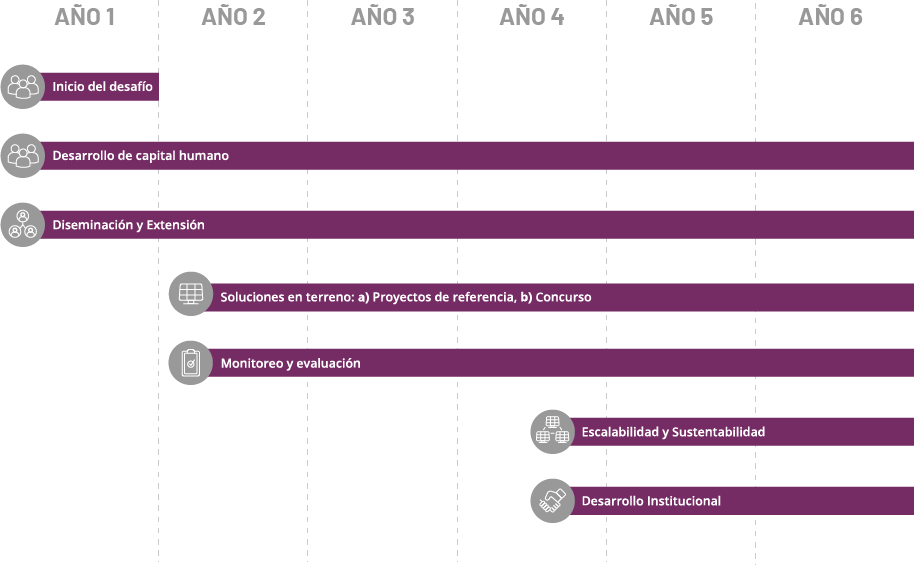 In 2012, an important group of institutions joined together to propose the creation of the Chilean Solar Energy Research Center (SERC Chile) , with the aim of becoming a world leader in scientific research on solar energy, with special emphasis on developing the potential of the Atacama desert. The proposal was accepted in the FONDAP contest of CONICYT and in 2013 an important group of institutions began to work on solar research.

The Chilean Great North has great potential for the production of electricity and heat on the basis of solar energy and for the application of both photovoltaic and thermal solutions, given, for example, its high levels of irradiation and its exceptional levels of clarity.

These conditions also make it an exceptional area for the study, development and testing of new solar technologies. However, simultaneously, there are a significant number of factors that restrict the development of its maximum potential.

The second stage of SERC Chile, which began in 2018 and will end in 2022, finds the country with a different development of solar energy: there is high penetration, to the point that the installed capacity is greater than 2 GW.

The State of Chile also created a road map to incorporate non-conventional renewable energies into the energy matrix, so it is estimated today that the penetration of solar energy can grow significantly by 2030.

The barriers of the year 2011 are no longer the same and many of them have been overcome. But there are others: for example, storage continues to be a scientific and technological challenge. And the incorporation of solar energy into production processes is necessary to make Chile a sustainable country.

Thus, for this new phase, SERC Chile has defined that it will guide its work following four strategic foci , which are related to the current development of solar energy and the productive characteristics of the country.

Following this approach, and maintaining its mission of becoming a leader in the field, between 2018 and 2022 SERC Chile will focus on these seven research areas :

Dr. Rodrigo Palma , professor at the Faculty of Physical and Mathematical Sciences of the University of Chile, directs SERC Chile together with seven other prestigious academics, who lead a team of 79 researchers and 8 postdoctoral students.

SERC Chile is creating new scientific knowledge; forming advanced human capital in solar energy; educating, informing and interacting with citizens and those responsible for public policies; and promoting technology transfer programs through projects co-financed by the public and private sectors.

Fundación Chile is a private non-profit corporation with more than 40 years of experience, which fosters innovations that “move the border of the possible”. Its partners are the State of Chile and BHP Billiton.

Its purpose is to accelerate the development of Chile, promoting models of radical collaboration that address the great challenges of the country’s future. For this, it promotes open innovation, through collaborative work platforms with other actors and organizations, to generate new synergies and new knowledge.

BHP Foundation was founded in 2013 and works to address some of the most critical challenges of sustainable development worldwide facing our generation. In partnership with others, we seek to raise the bar, find new solutions and set new standards for the future.

Through our programs we address challenges that are directly relevant to the natural resources sector.

The program in Chile is focused on supporting the development of the potential of young people through education, improving the capacity of organizations and groups to participate in decision-making and improving the resilience of communities to environmental changes.